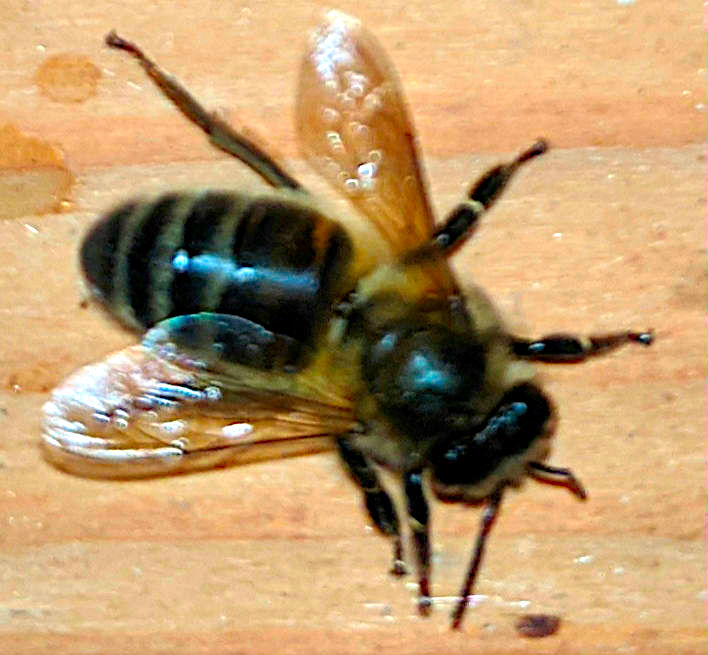 Tuesday the 21st July 2020, I heard a loud buzzing sound in the orchard and a cloud of blackness around the old bee shed. What on earth is going on over there I wondered?!? As I watched the cloud started to dissipate, and was able to get closer, I realised that a swarm of bees have made one of the old hives their new home!

I started to try to recall the bee rhyme my father had told me many times, but ended up confusing myself with which month was a golden spoon, so had to Google it!

So not a golden spoon, but being well into July, my new friends are apparently not worth a fly 🙁

I am very confused as to where this swarm came from, as my dads last hive only survived until 2012 and no-one (that I am aware of) keep bees in the local area. My father kept about a dozen hives at one point.

I went out at dusk to see which hive they had made their new home and managed to get a photograph of one. Forgive the bad quality as the low light and flash seemed to affect the focus on the camera.

This bee looks smaller than the ones my father kept, and is very black in appearance. I am wondering are the swarm a wild Irish honey bee who just happened to find the hive and make it their home.

Since they are definitely honey bees, and it is almost the end of July, I am tempted to start to feed them in the hope that they survive the winter. They seem to be very strong, but will soon weaken if they don’t have enough resources to support the colony over winter.