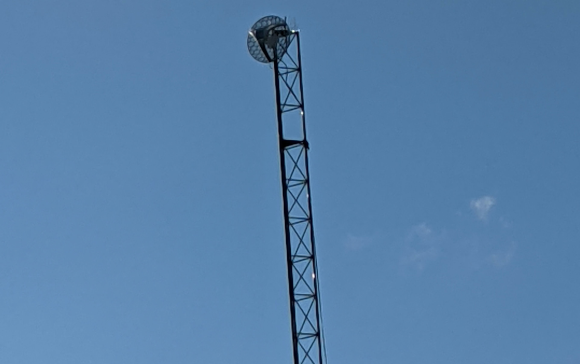 After discovering that there is a weak 4G signal in the area, I have been on a quest to try to improve the signal, which in return should see a speed increase and more stable connection.

While searching on eBay for some high gain antennae (most of which are totally fake and boast fictional and ridiculous gains) I came across a MikroTik LHGG LTE6 with a high gain 17dBi dish. I put in a bid and become the proud owner of this amazing piece of kit!

When the dish arrived I immediately got it configured, installed and pointed it at the nearest mast on my wind/crank up extend-able radio mast, but could not connect to the LTE Band 3 (1800Mhz) I was previously connected to. All I could connect to was a Band 20 (800Mhz) signal which can only achieve about 4-9Mbps.

After lots of head scratching and phone calls to neighbours, I started to question the mast location and decided to take a drive to locate it. The mast was not where is was supposed to be! I tried locating it on numerous apps and they all had different locations. I’d been submitting data to an app called OpenSignal for months, thinking it was using the data to improve the mast locations and after sending them emails asking for help and not getting any reply, I ended up deleting the app. I can’t understand why they call the app “Open” because there is nothing open about it!

I had used another app called CellMapper, which I couldn’t figure out how to use, so decided to join their community group. After asking lots of questions, I finally figured out that they collect signal data from the app running on your phone to try and calculate the “likely” mast position, but due to local geography this was often not correct. So when I was out and about, I’d try to take different routes (very scenic I must say!) of where I thought the most likely place a mast would be located (ie hills/mountains/etc). After lots of such drives I finally was able to pinpoint and visually identify the actual mast location and point my dish towards it!

This experience led to me going on to identity and locate other 4G capable masts in the area and share this information with members of the local community who also want a decent, stable internet connection.

For anyone interested in using LTE or better technology, I would highly recommend using CellMapper – https://www.cellmapper.net and/or submitting data via the app. Just remember to either turn recording on and off or set-up geo-fencing so that people can’t identify where you spend a lot of time (ie your home, work place, etc) The following screen capture is from a local Asda store, showing that there is a strong signal in the car park, but weak or no signal in the actual building (probably because of the mostly metal construction).