Today, despite the early night, I woke up and wasn’t feeling myself.  I think all the sitting around, listening to talking was taking its toll.  I was also feeling slightly home sick, as I could see my pup looking lost and lonely on my home CCTV.  He was being well looked after but I just wanted to give the big furr ball a big hug!

The BoF’s scheduled for that morning didn’t really interest me, so I decided to get some laundry done and head over the the venue just before lunch time, as there were a few BoF’s of interest that afternoon.  Ovie cornered me at lunch time and made me promise to do something with him!  I didn’t realise what Id promised to, but he was so excited I couldn’t say no.

We set off to what I later found out was a tool store, but this wasn’t any old tool store, this was a Makita tool store!!  I have NEVER seen a grown man acting like this, he was so excited, like a child at Christmas about to open his presents from Santa Claus!!  Running about telling me the codes of the drills, which was brushless, which ones run on x voltage batteries!

He then got chatting to a sales rep and I thought I’m stuck in here for the day!  But he was given a catalogue of all the products they have,  and I eventually got him out of the shop, kicking and screaming 😉 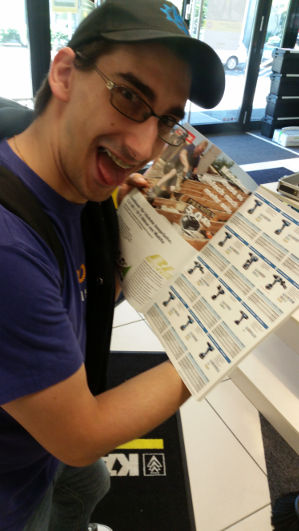 We returned to the university and attended some more BoF’s and hacking sessions in the corridors outside the rooms.  The corridors turned out to be the most productive places to be!  There were long tables and benches to sit on, kitted out with power sockets and were ideal to work at.  But in addition, you could see who was wandering about from room to room and could catch certain people for a nice chat about something or other!  It was a really awesome way to work!

It was a long day and we stayed to the end and helped to clean up.  I noticed that bottles in Germany could be recycled and you got a small deposit for returning them, so I went on a rampage collecting any bottle I could see!  I borrowed Valorie’s rucksack, which she was happy to lend to me if I carried it for her.  So I loaded it up full and we set off home.

On our way home we called into a supermarket which had a machine for claiming the deposit back.  So I started putting the bottles into the machine and one by one it spat them back out at me!  Turns out there are different schemes and this one only took glass bottles.  I had 3-4 glass bottles at the bottom of the racksack and the machine ate them and printed off a lovely receipt with something like 85cents on it!  So I decided that I would donate the money to allow city children to touch and experience farm animals, a very strange project for someone like myself who grew up on a farm in the country!

The rest of the bottles had to stay in Valorie’s back pack and I would have to carry it to the university tomorrow!  After all the excitement, we all went straight to bed!